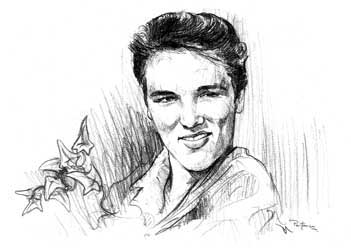 Back To Type Of Photos

Back To Main Menu

William Speer of Memphis, Tennessee has been referred to as "the man who shot Elvis". In 1954, the young singer was trying to launch a singing career. His publicist, Bob Neal, called William Speer to take a few publicity photos. Speer was a well-known and established professional photographer. "I just happened to be in the right place at the right time, but what a place and what a time! Id never heard of him to tell you the truth, but as soon as I sat him in front of the camera I knew he had it", recalls the now 86-year-old Speer.

Speer took eleven images and all of them turned out. Elvis didnt bring a change of clothes, so Speer was going to stop after only four shots, but the photographers wife suggested Elvis take his shirt off. He was shy, but agreed. Elvis later brought his parents to be photographed.


"When he first stepped in front of the camera, I told him, 'You sure would make a wonderful actor,' " says photographer William Speer of his most famous subject.

Elvis Presley was 19 when he showed up at Speer's studio. He had been sent to Speer by his first manager, Bob Neal, to have publicity photos shot to help promote his fledgling singing career. Speer, now 85, grew up as a fan of black-and-white movie glamor shots in the glass cases in theater lobbies when he was a child. He used what he calls "Rembrandt lighting" with an overhead spotlight casting shadows downward. Before the photos were even developed, Speer and his wife, Vacil, knew there was something special going on:

"It felt like an electrical charge in the room. You can tell the famous ones or the ones who are going to be famous. They stand out in a room without you even knowing who they are," says Vacil Speer.

Speer remembers thinking Elvis "looked like Burt Lancaster. He could have played his brother in the movies." When the photographs were developed, no one was disappointed. "He came off that dead film like dynamite. Either you've got it or you haven't," says the photographer.

The photographs were among the most memorable ever shot of Elvis, partly because Vacil Speer was bold enough to ask Elvis to try "something different" - a few shots with his shirt off. "He didn't look real happy about it," but he obliged, says Vacil Speer. Elvis seldom used the shirtless poses for publicity purposes. When he saw them, the Speers say he laughed and said, "These have got to go." But they have become collectors' items. In a 1987 column in the New York Daily News, columnist Liz Smith called one of the brooding shirtless poses "the most beautiful photo ever taken of Elvis." The photos also were turned into a 1993 calendar with Elvis the cover boy for 11 months and a separate Speer photo of Elvis's parents, Vernon and Gladys Presley, as the 12th month.

Vacil Speer says she missed her chance during the session to make it even more memorable. "Somebody said, 'Why didn't you take his pants off while you were at it?' I could have been worth a fortune by now."

Even so, William Speer now is negotiating with a New York collector who has offered an undisclosed sum in what Speer calls "the high six-figure range" for his original negatives. Two of the photos have appeared in Time magazine through the years.

Speer friend Bill Carrier, another well-known Memphis photographer, helped turn the photo shoot into the 1993 calendar, which was scheduled for sale on the QVC television shopping network. Carrier had printed thousands of the calendars when the deal fell through and is now looking at ways to market the calendar again - possibly in the next year with the same configuration of days as 1993.

Carrier says the photograph of Vernon and Gladys Presley is intriguing in itself. "It's one of the few pictures where Gladys is smiling."

That is a rarity for a Speer photo. His Elvis series also includes a smiling Elvis, although, he says, "I don't usually take smiling jackass pictures. If you're looking at a person with a smile, all you see is the smile. The smile kills the whole thing. The picture is in the eyes."

Elvis sent his parents to Speer for their portrait and returned once with a girlfriend to have her portrait shot. It was then that Speer thinks he may have offended Elvis, who never returned. While he was concentrating on photographing the girlfriend, Elvis was in the next room and began singing.

Personnally I am not convinced that every photos has been taken on the same sitting.

The last three photos without shirt looks like Elvis would have been a little more older than the others pictures.

Back To Type Of Photos

Back To Main Menu